Pillow Biters/ Twilight Moonlighter Forum » Obsessions » What Twilight Paraphenalia Do You Own? » Has Twilight paraphenalia thrown up all over you??

Has Twilight paraphenalia thrown up all over you??

Admin
Posts : 109
Join date : 2009-04-07
Someone posed this question on our facebook page, and I have not laughed so hard in a loong time after reading all of the LENGTHY answers.

You may think you're a freak after you write down everything you own, but once you realize that most of us are in the same boat (Twi-HARDS own soo much-we're total franchise victims, plus we do anything to feed our frenzy), you'll find you're not alone. It's hilarious.

Posts : 26
Join date : 2009-04-14
Age : 31
Location : Houston
Oh Lord haha! I've been planning on doing a blog post about this soon. I went around my apartment and took pictures of all our posters and other stuff. I'm just waiting to get a picture of the decals I forced Jeremy to put on the back window of his truck (Team Edward!), and then I will post it.

I don't allow the kids to put stuff on their doors, but a Twilight poster is the one exception I'll make.

Y'all would all be so proud, because we went out tonight and he bought me another copy of Twilight and some key chains with no complaint at all!

He was a little resistant to the decals,(we have two: One says, "Twilight" and the other one says, "Team Edward"),but now they are stuck there proudly on his back window.He tells me he gets teased at work about it a lot. One day his boss came in and said, "You know what Jeremy? Team Jacob." just to mess with him. He forgets they are back there lol.

Our apartment is like, Twilight central over here. We have all the posters from WalMart, there are 2 of them in the living room, we have the magnets on the fridge, and I have the Rob Pattinson GQ cover framed on my bedside table, PLUS he bought me the giant 5 foot Edward Cullen poster from Blockbuster that's now hanging in the bedroom. He even helped me hang it!

He loves me so much lol. I forget sometimes how lucky I am he's so supportive of my craziness!

Posts : 58
Join date : 2009-04-09
Age : 36
Location : Texas
Whoa....what's a stronger word for lucky?! Well, I'll be passing thru H-town more frequently. It's more like J-rod dragging me to see the stinkin' Astros play(sorry, I'm Braves ALL THE WAY) so, if I catch a glimpse of this vehicle with the 2 decals...tell him not to freak out when I want a picture with it!

Posts : 2
Join date : 2009-04-12
I was thinking this would make a funny "drowning in merch" post, too, but I'm lazy and I jot down notes and then totally forget about them. Or don't get around to it... Er, and I also don't think I can compete merch-wise! I haven't actually tried to hang up anything (I have to draw the line somewhere and don't want to put DH over the edge - lol), but I do OWN three posters (how did that happen?!) - the blockbuster one, the one that came with the Hot Topic pre-order, and "The Stare" {{{shudder}}}, plus an assortment of other stuff - all the books (natch) including an extra copy of Twilight that I loaned/forced upon to my sister (more to come on how that went at some point), a button or two ("Say it!), SweetHearts, a "Lion/Lamb" keyring (I keep the "emergency" keys to JJ's place on it - awwww...), mini-Edward and his Twi-carrying case, um... and [takes breath] I have three copies of the DVD (Target, HT, Amazon)... and some other stuff... At least here I can admit all this and you guys won't think I am crazy (or any crazier than the rest of us - lol!)... : )

I am sure I am probably doing this post wrong but the forum is awesome, PB - thanks!!!

Admin
Posts : 109
Join date : 2009-04-07
Hey, Snarky!
LOVED your post on the Stare poster; that's NOT my favorite pic of Rob to begin with; I can't imagine it in at 3 foot version. That's enough to make me shudder alone. Those scraggly sideburns; ugh.

Posts : 2
Join date : 2009-04-12
Yup - it's true! Three copies... Um, if I want to be REALLY honest, I actually have [drum-roll please...] FOUR copies, but one is going back to the store. The back story: JJ and I pre-ordered on Amazon way back before the DVD was out - two copies (one for each of us). But then when they started coming out with all the info on the extras and exclusives that would be on various discs, we decided to get the Target and the Hot Topic versions, instead (I NEEDED the three-disc set at Target and I [heart] my Hot Topic Film cell of Edward - lol!]. I totally forgot to cancel the Amazon order, though, and they showed up the day before the DVD was actually released! Yes, I am nuts. : )

Admin
Posts : 109
Join date : 2009-04-07
Hee hee, Snarky- I would have 3 copies, except that I DID remember to cancel my Amazon order early. Then I regretted it, because I would've gotten it Friday. That's what I get the ONE time I don't procrastinate. Oh well.

Whitley- Jeremy needs to lead our boys in a weekly discussion group "How to Satiate Your Significant Other with all things Twilight and Reap the Rewards... Greatly." Why haven't our boys figured that out yet?? 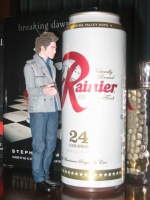 Posts : 57
Join date : 2009-04-09
Age : 49
Location : In my happy place.
Admittedly, I am not that in to owning lots of Twilight paraphenalia. It took me 4 weeks to deliberate over buying an Edward action figure so clearly I am conflicted. That said, I am the proud owner of:

- Two Pocket Edwards (one to play with, one still in the package)--the plastic Cullen Crest that came with him is glued to the middle of my steering wheel in my car.
- One T-shirt that is a very subtle, retro design http://www.zazzle.com/forks_wa_2_tshirt-235225233929782898
- One DVD (the Amazon one that did not arrive until the following Monday after it's release--I was going crazy!)
- One "I am Switzerland" bumper sticker (that isn't even on my car)--I bought this ages ago thinking it was subtle and I would actually put it on my car--I am too chicken.
- One blood red water bottle that says "Twilight" that was part of the "Twilight" package at Kalaloch Lodge on the Olympic Pensinsula (where PB wants to spend her next anniversary

)
- The book series in hard back
- One Forks, Wa postcard that was given to me
- One gift card that says, "Happy Birthday! Love, Edward Cullen" that was accompanied by flowers delivered to work on my birthday last year courtesy of my husband.
- One Photoshopped photo of Edward and me given to me for my birthday by my friends the opening night of "Twilight"
- Various magazines with Twilight/Twilight actor coverage.
-Sweethearts Conversation Hearts--set of three to save (what is wrong with me?) and three to consume (1 for me and 2 for my daughters)

I am happy to say that my Pocket Edward is proudly displayed on my kitchen counter and I do not remove him for any reason unless he is going on an adventure with me and daughters. I may be closeted but I come out every now and then.

My eldest daughter is not interested enough yet to put up Twilight posters but I would not deny her if she wanted to. Thank goodness I have daughters! I, too, would allow it to be displayed on her bedroom door. 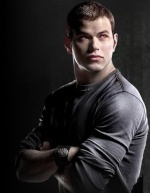 Posts : 15
Join date : 2009-04-26
Age : 36
I just took inventory of my stuff and here's what I have
All the books
Borders edition DVD
Bella perfume from Torrid
3 Twilight shirts
1 I heart boys who sparkle bumper sticker
A tote bag my friend made for my birthday
Movie companion
Alice Cullen inspired silver shoes from Payless
I'm getting a 5ft tall Edward poster and another tote bag I won from playing Twilight trivia in the mail soon
I don't have a pocket Edward but I'm thinking he's necessary now.....

Tasha wrote:There's Alice shoes at Payless?? For realz?! I have to have them. Even if they match nothing!

Yes I got mine a few weeks ago. I bet they are still there. I got them on sale for $12.99. We're starting to seem more and more like twins. Are you attending Twicon? Please say yes lol

Tasha wrote:I'm going tomorrow! To payless that is. Ummm TwiCon is still up in the air. My hater-hubs says no...I say yes. We'll see who wins!

Nooooo you must come you've found your twin!

Here's a link to one of my posts...it explains it all!

TwiFessions wrote:I finally got a Pocket Edward a few weeks ago and found some Twilight stickers at Hot Topic for $0.98!

I was just about to ask what a Pocket Edward is... Its a sticker? Why is it called that?

Re: Has Twilight paraphenalia thrown up all over you??

Pillow Biters/ Twilight Moonlighter Forum » Obsessions » What Twilight Paraphenalia Do You Own? » Has Twilight paraphenalia thrown up all over you??