"We're going to tell Alice that I ran right to the clothes," I whispered, twisting my fingers into his hair and pulling my face closer to his. "We're going to tell her I spent hours in there playing dress-up. We're going to lie."
...... He pulled my face to his with a sudden fierceness, a low moan in his throat. The sound sent the electric current running through my body into a near-frenzy, like I couldn't get close enough to him fast enough.
I heard the fabric tearing under our hands, and I was glad my clothes, at least, were already destroyed. It was too late for his. It felt almost rude to ignore the pretty white bed, but we just weren't going to make it that far.
- Breaking Dawn, pp. 481-482

"Damn it," he growled, kissing hungrily down on the edge of my jaw.
-Breaking Dawn, p. 754

He says that a few times throughout the saga... I think THAT's why he makes me swear... damm Edward Cullen..... 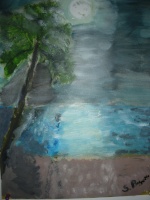 Posts : 49
Join date : 2009-04-08
Location : Winder, Ga.
How about this..... "I could really appreciate him now-- could properly see every beautiful line of his perfect face, of his long, flawless body with my strong new eyes, every angle and every plane of him. I could taste his pure, vivid scent on my tongue and feel the unbelievevable silkiness of his marble skin under my sensitive fingertips." page 482. Both 482 and 483 are STEAMY!!!!